The 2018 Commencement Address will be delivered by John P. Grotzinger ’79 S.D. ’13. A leader the field of geology, Grotzinger made history as the project scientist for the Mars Science Laboratory when the NASA team that he led successfully landed the Curiosity rover on Mars and confirmed that the environment there could support life.

Grotzinger’s contributions the field of geobiology and the study of sedimentary processes are so significant that he has been elected to into the National Academy of the Sciences and he received NASA’s Outstanding Public Leadership Medal in 2013. 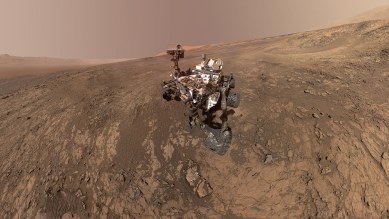 As a fellow alumnus of Hobart College, President Gregory J. Vincent ‘83 looks forward to Grotzinger’s Commencement Address. “In his quest to understand the history and possibilities of life in our universe, Dr. Grotzinger has demonstrated that ingenuity, integrity and a diligent application to the scientific method can truly take us to new worlds,” says Vincent. “His achievements, which bring great pride to his alma mater, are a powerful testament to the vital role that researchers, scientists and engineers serve in advancing the public good and humanity itself. I look forward to welcoming him back to campus this spring to deliver what is sure to be an inspiring Commencement address.”

While studying at Hobart, Grotzinger was a member of the lacrosse team and Theta Delta Chi. In 2013, former President Mark Gearan awarded him with an honorary Doctor of Science to celebrate his achievements in the sciences and his time at the Colleges. “Dr. Grotzinger is at the forefront of some of the most exciting scientific work of our time. As a dedicated alum, he has given us fascinating insights about his role with NASA’s Curiosity mission and the development of Mars exploration,” says Jared Weeden ’91, Assistant Vice President of Advancement and Alumni Relations. “His achievements are nothing short of extraordinary and it’s an honor to welcome him to campus in May.”

After receiving his bachelor’s degree in geoscience from Hobart College, Grotzinger continued his education in the sciences and received his M.S. at the University of Montana in 1981 and his Ph.D. at the Virginia Polytechnic Institute and State University in 1985. He went on to serve as a Professor of the Earth, Atmosphere and Planetary Sciences at the Massachusetts Institute of Technology. Currently, he is the Fletcher Jones Professor of Geology at the California Institute of Technology and serves as the chair of Geological and Planetary Sciences.

In celebration of the accomplishments of the classes of 2018, the Commencement ceremony will be held at Hobart and William Smith Colleges on Sunday, May 13.